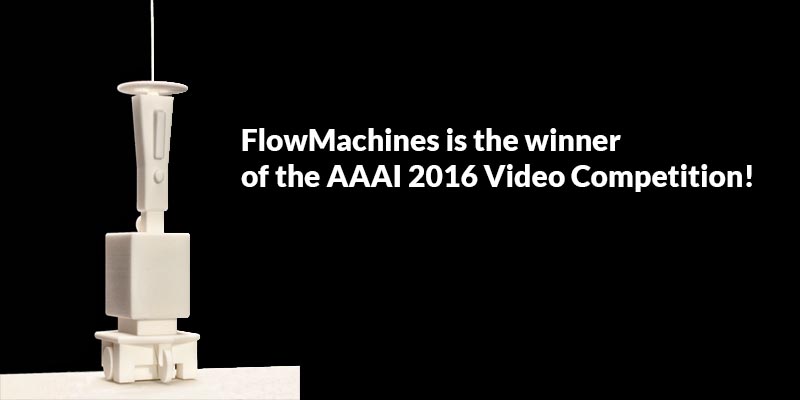 Flow Machines is the winner of the 2016 AAAI Video Competition

Flow Machines is the winner of the 2016 AAAI Video Competition (ASSOCIATION FOR THE ADVANCEMENT OF ARTIFICIAL INTELLIGENCE).

The winning video (above) is Machine Learning Techniques for Reorchestrating the European Anthem. It illustrates the process and the results of several harmonizations of Beethoven’s Ode to Joy in different styles. It has also appeared on the TechCrunch article Hear AI play Beethoven like the Beatles).

First, the Bossa Nova accompaniment exploits original guitar recordings recomposed using an improved concatenative synthesis algorithm.
Then we produced the The Lounge harmonization by first transcribing a lounge theme and then transforming it using an algorithm.
We produced the jazz 6-voices harmonization starting once again from transcriptions of Take 6 harmonizations by Antoine Dessein, and then applying a system using Markov constraint techniques.
We produced the Ennio Morricone, Beatles and Lillywood and the pricks orchestrations tby exploiting the original recordings made by Benoit Carré, and then recomposing them using FlowAudio, a system exploiting Markov constraints techniques.
Finally, the Bach chorale is produced from MIDI transcriptions of Bach chorales, using a max entropy model.

The video is by Fiammetta Ghedini.

Flow Machines also won the 2013  AAAI Video Competition with “Flow Machines: Can Computer Help us to be More Creative?”: